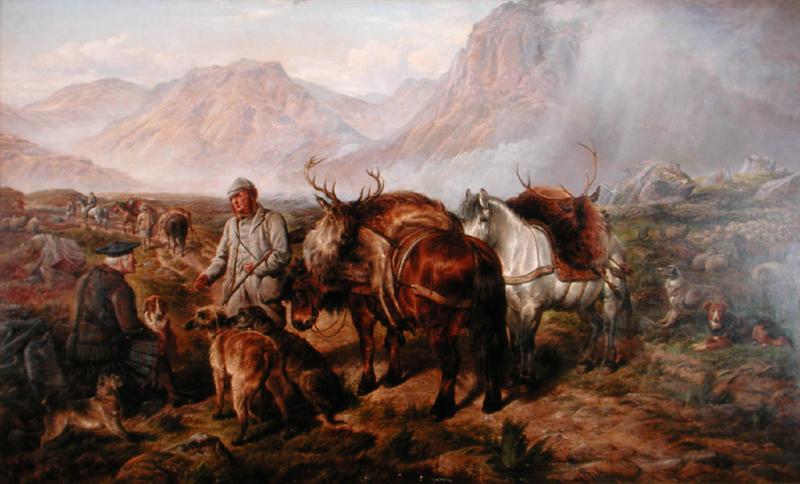 Charles Jones was a painter of sheep, cattle and deer in landscape settings. His fondness for this, and his skilful and realistic portrayal of the animals, made him affectionately known as ‘Sheep Jones’.

This is one of his most important works. It depicts a hunting party pursuing deer in nineteenth century Scotland. Hunting was a popular pastime for the newly rich and this shows a scene after successful kills. The hunting party has halted while on its way home; two of the ponies are carrying dead deer; and the hounds and dogs are resting with the sportsmen. The rest of the party are still tramping along the rugged path. On the right is a flock of sheep and two collies and in the distance are dramatic mountain peaks.

His works depicting Scottish landscapes were recognised by him being elected a member of the Royal Cambrian Academy.

Charles Jones was born near Cardiff but spent most of his career in London. He specialised in depicting deer, sheep and cattle in landscape settings. Early experiences helped his expertise in animals: aged 21 he lived in a farmhouse in Maidenhead, Berkshire, where he painted the cows, sheep and goats on the farm. He spent some time at a friend’s stud farm and gained experience in drawing horses, plus a good understanding of anatomy which stood him in good stead in later years. He later visited the Highlands of Scotland and painted the hardy cattle and sheep of that area.