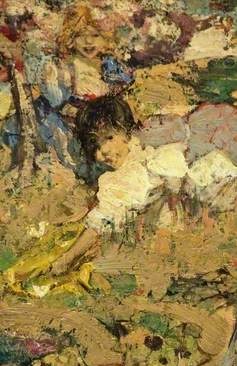 Hornel was born in Australia but was brought to Scotland by his parents shortly afterwards and remained there for most of his life. A painter of landscape, flowers and foliage he was strongly influenced by Japanese art, spending eighteen months in the country in 1894 – 5.

During the latter part of his career, he made a speciality of pictures of young girls in woodland and floral landscapes. A device he often used, which you see here, was to create a flattened perspective. His use of colours and texture meant that the children seem to blend in with their surroundings. The ‘cherubs’ in this painting are clearly children rather than the order of angels.

These paintings were extremely popular at the time because of their sentimentality. Hornel made a great deal of money and eventually bequeathed his large house in Kirkcudbright as a library and art gallery for the town, now the Kirkcudbright Galleries, which houses 23 of his paintings.