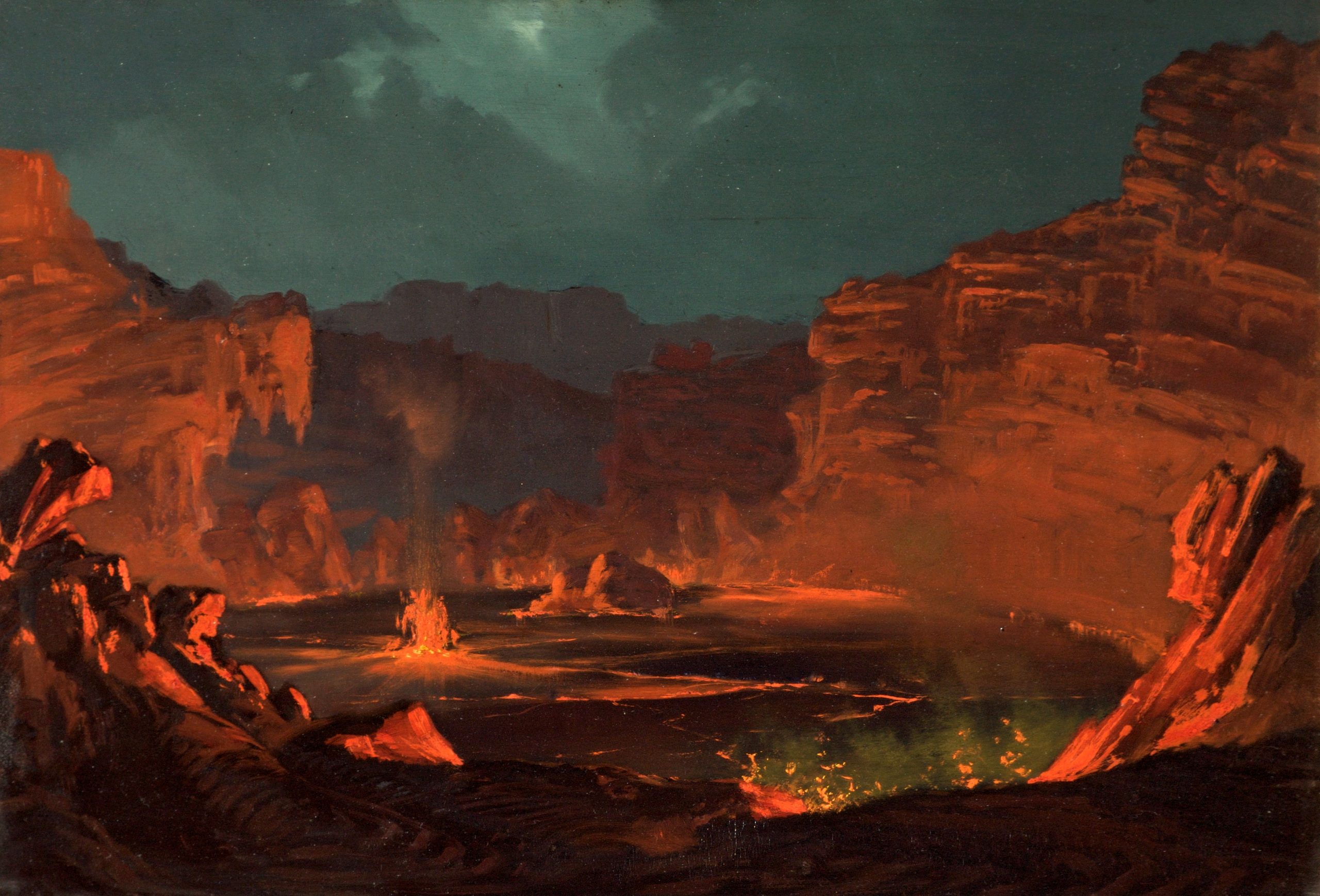 The Crater of Kilanea, Island of Hawaii

The Crater of Kilanea, Island of Hawaii or ‘Halemauman’ An Active Lake of Molten Fire

Dated 1883, two years after Charles Furneaux settled in Hawaii, this painting reveals the artist’s experience of the flow of lava from the volcanoes of Hawaii. In this work, he has elected to paint by night, emphasising the dramatic qualities of the incandescent lava flow, which he shows spurting from the confines of the steep banked volcanic crater that like a ruined ancient amphitheatre contains this molten scene. The dramatic nocturnal lighting typical of Furneaux’s views of the volcanic landscape recall the visionary images of John Martin.

Sir Merton Russell-Cotes purchased this painting and another by the artist, during his visit to Hawaii in July 1885. In his biography ‘Home and Abroad’ he recalled that- ‘whilst sojourning in Honolulu, my wife and I met two French artists, Jules Taverniers and Chas. Ferneaux.’ The work appears in the 1908 Deed of Gift between the Russell-Cotes’ and the Borough of Bournemouth as ‘Halemaumau, Active Lake of Molten Fire’, and was listed as being in the Main Hall Staircase and
Balcony area.

Probably the son of French parents, Charles Furneaux grew up in Massachusetts and become an art teacher in Boston. He exhibited landscapes of New England at the Boston Art Club from 1878 to 1880, during which time he came into contact with William Brigham who had a particular interest in the Islands of Hawaii and their volcanoes. In 1880 they travelled there together and visited Big Island to study the lava flows of Kilauea and Mauna Loa. Furneaux returned to Hilo in 1881 to record the Mauna Loa lava flows that threatened to engulf the town. In that year he made a series of oil sketches that capture the vivid reality of the volcanoes. These have been called ‘the closest approximation to plein-air […] paintings of the nineteenth-century volcano that exist’. Furneaux held an exhibition of his Hilo paintings in the Judiciary Building at Honolulu in August 1881. This was the first one man art exhibition to be held in Hawaii. His works received praise in the ‘Hawaiian Gazette’ on 3 August, for being ‘really graphic […They] give a splendid idea of what a lava flow is like to anyone who has not seen it.’ Furneaux settled in Hawaii where he became a leading painter producing portraits of the Royal Family as well as volcano views. He was also a photographer, recording the everyday life of Hilo where he became a prominent citizen. A street there is even named after him. His paintings are rare as the result of a studio fire, which destroyed much of his work in 1895. A sketchbook of Furneaux’s drawings recording the lava flows of 1880-81 is in the Hawaiian Historical Society Library.