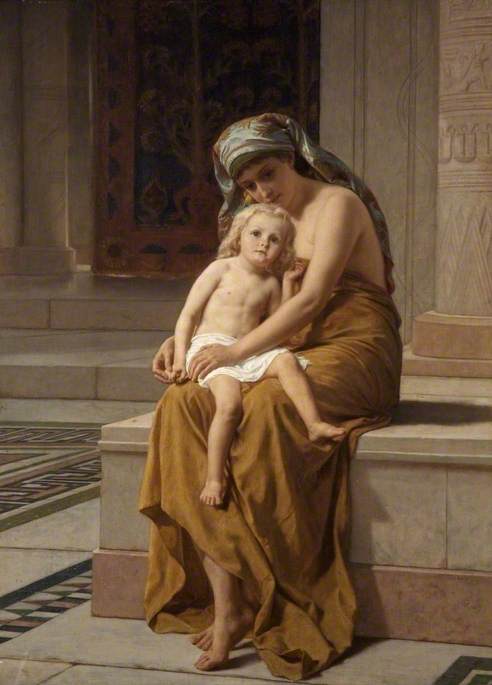 Frederick Goodall came from an artistic family. His father, Edward, was an engraver, and his brother, Edward Alfred, was a painter and illustrator.

His first paintings were rustic genre scenes in the manner of Sir David Wilkie. From 1860, however, his reputation was established with his paintings of Egypt and Biblical genre scenes. Goodall visited Egypt on several occasions and collected models for the details of his pictures including date plants, palms and even a small flock of Egyptian sheep which were quite tame and lived in his garden.

The arbitrary title of the work is misleading and was probably given by an art dealer or previous owner. The scene is more typical of Goodall’s Biblical genre scenes and a small oil sketch of the work seems to testify to its real subject. The small study is titled, The Infant Samuel, and indicates that the painting depicts Hannah and her son, Samuel. This would certainly make more sense, as the figures do not look Egyptian and that it is more characteristic of Goodall’s Old Testament genre subjects.

In the same year of this work, Goodall sent two similar scenes to the Royal Academy, Hagar and Ishmael and Sarah and Isaac. It is a very finely and sensitively painted portrait of a mother and child and has echoes of a Madonna, despite its subject.

The work was given to the museum in 1955. It could not be more appropriate as Merton had purchased an almost full-sized drawing of the work