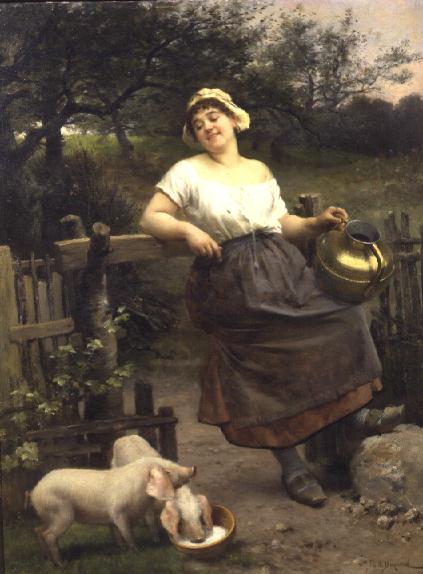 Feeding her pets: A peasant girl Brittany, or, The Piggies Breakfast

This genre painting shows a voluptuous milkmaid leaning back against a fence and smiling down at a pair of piglets who are guzzling milk from an earthenware bowl that she has apparently filled from the large copper vessel resting against her thigh. The milkmaid is silhouetted against the dark background of a shadowy orchard and meadow beyond the fence. The direction of the light picks out her skin and light clothing, and reflects off the copper vessel. There is a note of sensuous humour here, with the suggestion of a comparison between the milkmaid and her porcine pets.

This painting featured in the 1895 Art Journal as The Piggies Breakfast, and is also known as Feeding her Pets.

Emile-Antoine Bayard was born in La Ferté-sous-Jouarre, Seine-et-Marne in 1837. He was a pupil of Léon Cogniet, and first exhibited at the Paris Salon in 1853. From 1861 to 1873 he was a prolific magazine and book illustrator, including the works of Victor Hugo, who claimed Bayard was his favourite illustrator. Bayard’s image of Hugo’s character Cosette is still used today as the publicity image for the Cameron Mackintosh musical Les Misérables.

Bayard was decorated with the Légion d’Honneur in 1880. He resumed painting with his submission to the 1873 Paris Salon of a large satirical drawing Sedan 1870, critical of Napoleon III. Bayard continued to produce images critical of the Franco-Prussian War throughout the 1870s. By the 1880s he had moved on to producing humorous, decorative and sensual works, plus ‘frock-coat’ subjects from the 18th century.

He died in 1891 while travelling in Cairo.