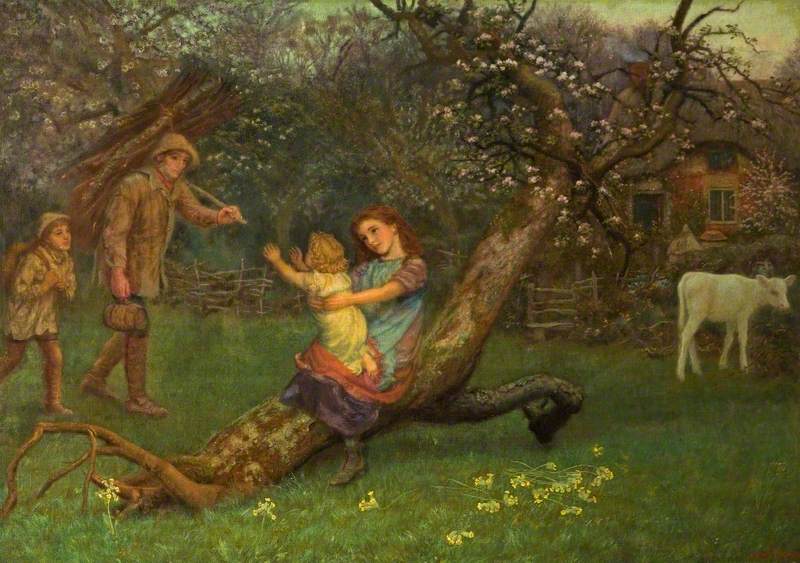 Home from Work (or Evening)

Home from Work (or Evening)

The painting depicts a father and son returning from a long day’s work in the fields and being greeted by an elder daughter holding a baby. Hughes was an important contributor to the Pre-Raphaelite movement in his early years. His later works, such as this one, are considered less important although they retain their Pre-Raphaelite influence such as the richness of colour. Ford Maddox Brown praised it as “undoubtedly one of the best hung in the Academy” when it was first exhibited at the Royal Academy in 1871, appearing with a quotation from Shakespeare’s Henry V “So service shall with steeled sinews toil, and labour shall refresh itself with hope” (Act II, Scene II).

However the picture you now see differs in some major respects from its original composition. A study from 1870 shows the figure of the mother in the scene, but she was painted out at a later date. The young girl was originally looking at her mother. Hughes reworked the picture in 1913, adding the cottage in right background, and repositioning the calf. He said “Among other work I have been renovating a very old and forgotten one of the labourer coming home where his daughter and babe, ready for bed, await him in the orchard. One end was cut off to shorten it … it will be a great deal better than it ever was”.

The painting has been known by different titles. When exhibited at the Royal Academy it was called ‘Evening’; at an exhibition in Glasgow in 1873 it was called ‘After Work’; it was referred to as ‘The Return’ in a letter written by Ford Maddox Brown in 1886; and when sold in 1921 it was re-titled ‘Home From Work’.