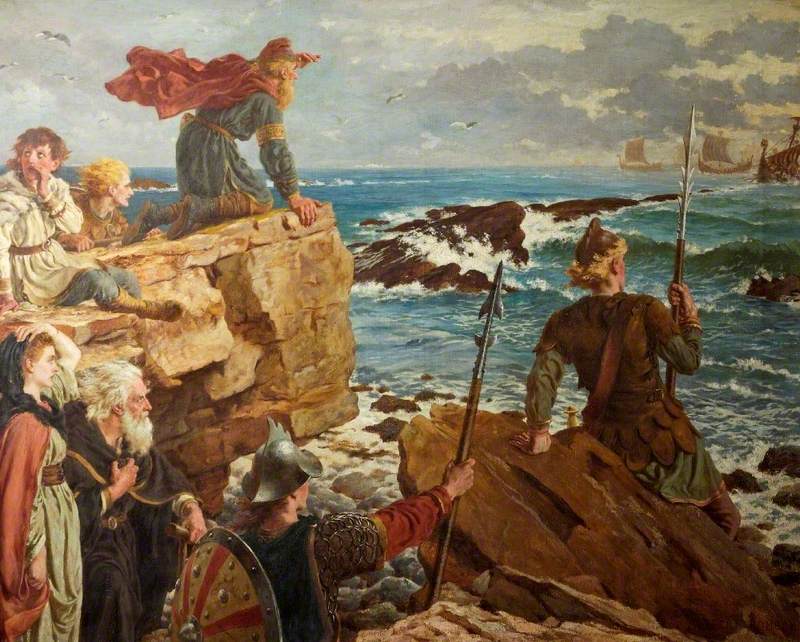 How the Danes came up the Channel a Thousand Years Ago

How the Danes came up the Channel a Thousand Years Ago

The image shows a view off Peveril Ridge, Swanage, AD 877. The painting is an imaginative Victorian reconstruction based on an account in the Anglo-Saxon Chronicle of a naval battle between Alfred the Great and the Danish fleet of King Guthrum. The Danes were seeking to invade at Swanage but were foiled when their fleet of 120 ships was wrecked and sank off Peveril Ridge. Bone has created a lively view with the figures depicting ordinary people, old and young, male and female; people with whom the viewer could empathise. Bone has demonstrated how history could be made relevant to his time and appeal to a contemporary audience.

The Russell-Cotes has two of his tapestry designs and a pencil portrait study of King Arthur and several local topographical sketches.

Herbert Bone was a painter of genre, flowers and literary subjects and designer of tapestries. He was recommended by John Everett Millais to the Royal Tapestry Manufactory in Windsor to design scenes from the life of Kings Arthur and Alfred for Prince Leopold Duke of Albany. Bone had already studied tapestry technique at the Académie des Beaux-Arts in Antwerp. Bone also worked for William Morris, was a prolific book and magazine illustrator and taught and prepared students for the Royal Academy Schools. He specialised in stencil tints and was a long-time member of the Art Workers Guild and Arts and Crafts Society.