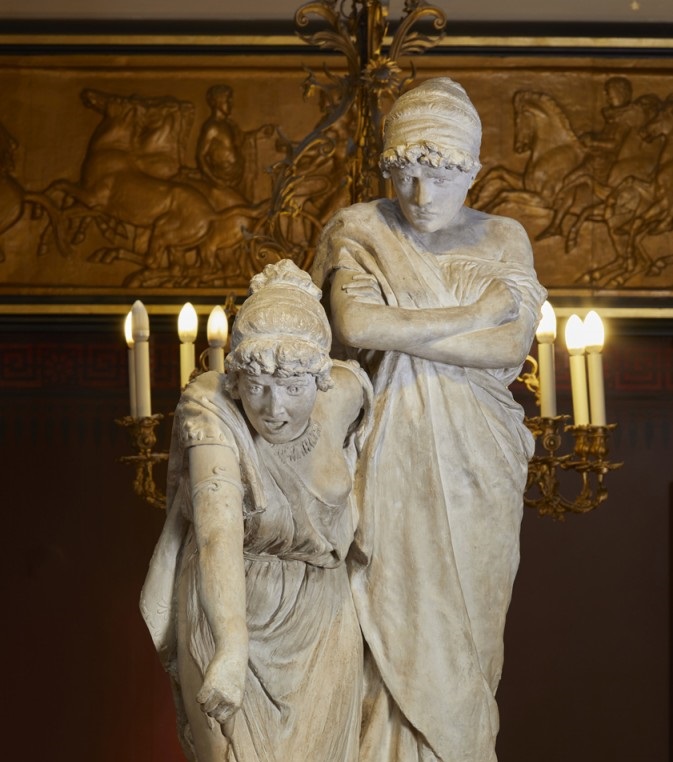 Andreoni was an Italian sculptor with a large studio in Rome. ‘Pereat’ is an example of strong women – a theme appearing throughout the Russell-Cotes. The sculpture depicts two female spectators, in classical clothes, at a gladiatorial arena. ‘Pereat’ is from the Latin phrase ‘fiat iustitia et pereat mundus’ meaning ‘let justice be done, even if the world should perish’. This was shouted by spectators in the Roman amphitheatre.

Gladiators were professional fighters who entertained crowds in Roman arenas fighting each other or wild animals, sometimes to the death. The gladiators were often condemned criminals, prisoners-of-war or slaves. They could earn their freedom after three years, although most did not survive their first year. A good fighter could earn popular support.

The pedestal was lost but has been copied from the original marble and bronze group at the Wadsworth Athenaeum Museum, Hartford, U.S.A. It shows a gladiatorial helmet, short sword and relief panel with a view of the arena and audience – including the two females. The plaster version at the Russell-Cotes was made to earn income for Andreoni’s studio. For dramatic effect, Merton placed ‘Pereat’ on the Upper Balcony with the visitor below in the intimidating position of a defeated gladiator.

Andreoni was a prolific sculptor of figures and busts. He was based in Rome, but he sent works for exhibition to as far as Glasgow (1888), Paris (1889), Berlin (1892) and he was active for a time in America. This exposure established his international reputation. Andreoni specialised in historical and biblical subjects. His expertise with the chisel is evident here in the virtuoso handling of clothing delighting in the richness of detail. Perhaps Andreoni’s greatest contribution was his large workshop in Rome where a generation of sculptors received their training.