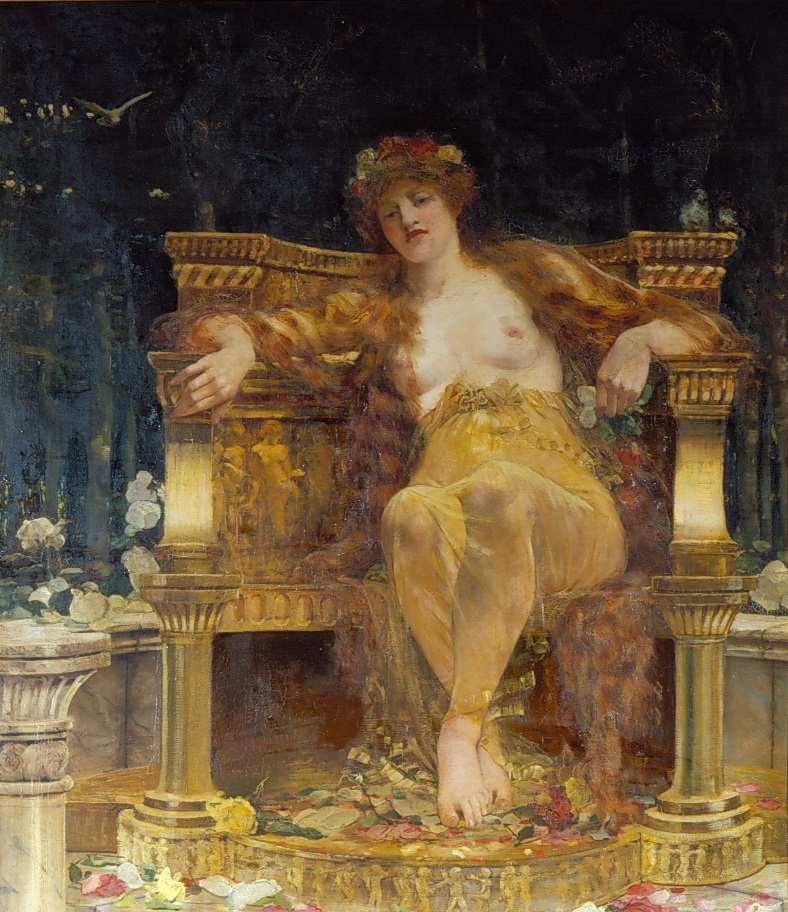 Psyche at the Throne of Venus

Psyche at the Throne of Venus

The subject of this narrative painting is taken from “Earthly Paradise” by William Morris, adapted from a story that first appeared in “The Golden Ass” by Lucius Apuleius, 2nd century AD.

Psyche’s beauty was such that it attracted the jealousy of Venus, goddess of love. Ordered by the Oracle to be taken to a mountain to be sacrificed, Psyche instead found herself taken away by a man who treated her kindly but who forbade her to look at him. Curiosity got the better of her and one night she lit a lamp to find out who her lover was. It was Cupid, the son of Venus, who fled and would not return.

This painting shows Psyche begging Venus to reunite them. Venus’ jealousy of the beautiful Psyche is clearly shown in her expression, and in the composition of the painting which puts Venus is a position of authority looking down on the distraught Psyche.

The end of the story though was a happy one. Psyche wandered the earth looking for Cupid, completing seemingly impossible tasks set by Venus. Eventually Zeus intervened, reunited the couple and made Psyche immortal so that she could join the other gods.

Hale was born in Hastings and educated at Marlborough College, followed by art training in Paris from 1873 – 1875. From 1877-78 he worked as a war artist for the Illustrated London News following the Russian army in the Russo-Turkish War. He was a painter of classical, genre and mythological works. Most of his genre scenes are of army life, or the sea.