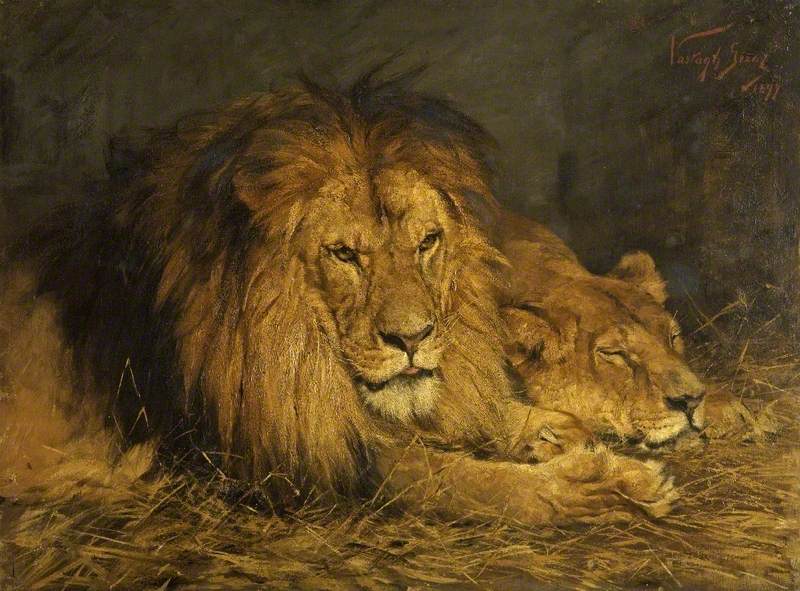 Repose (or The British Lion)

This painting of lions was first purchased by Pears Soap Limited as one of their three annual prints for sale at 2s 6d. It was originally entitled Repose. However, when the painting was published in the 1899 Pears Christmas Annual, it was renamed The British Lion, probably to increase its saleability by appealing to the patriotism of the popular market. Despite its new title, this overtly sentimental representation of a lion and lioness is typical of the artist’s paintings of similar subjects.

Vastagh’s careful study of lions in Northern Africa and the Zoos of Northern Europe enabled him to render details of pose, facial expression and fur texture with a realistic, broad-stroked technique that reveals his thorough knowledge of the animals. He had an intimate understanding of the anatomy and nature of these majestic animals. The brushstrokes for the facial features of the lion are short and delicate, while Vastagh treats the fur in a more, rough manner, mixing colours in harder contrasts. He has captured the magnificence of these animals and this image is one of his most popular.

Géza Vastagh was a Hungarian artist and was best known as a painter of exotic animals, especially lions and lionesses. The son of artist György Vastagh, following early schooling in Hungary, he studied in Munich at the Academy of Fine Arts, and made his debut at the annual exhibition there in 1883, at the age of 17. Throughout his fifty-three years, he lived in Budapest, but also travelled through Africa, the Middle East, Europe and spent some time in England.