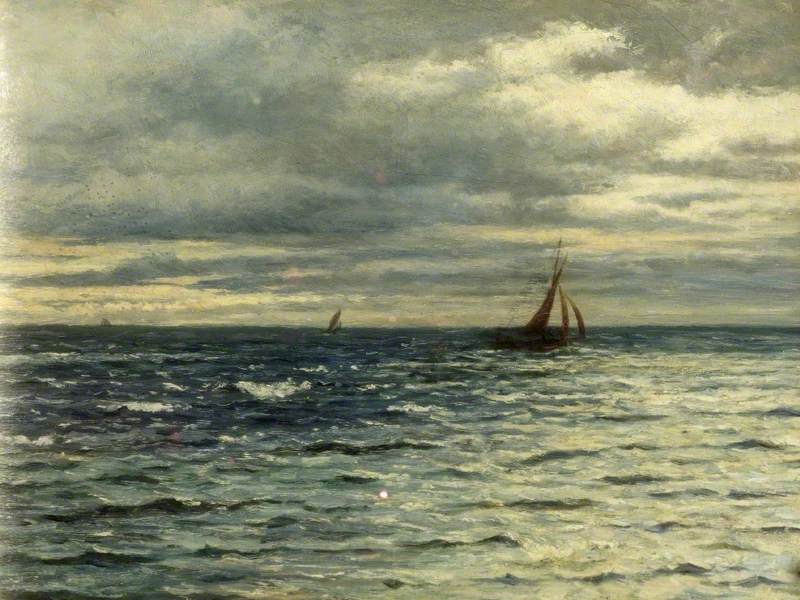 Henry Moore RA was an English marine and landscape painter. Almost all his early pictures were landscapes, painted in many parts of England, or in Switzerland. It was towards 1870, that he began to devote himself almost exclusively to the marine subjects in which the best work of his maturity was done. He had a profound and scientific knowledge of wave form, acquired at the cost of exposure in all weathers, and he was generally content to paint the sea itself without introducing ships or human figures. He made his studies chiefly in the English Channel. He was a fine colourist and held the foremost rank among English marine painters of his day. Among the most remarkable of his Academy pictures are A White Calm (1858), The Launch of the Lifeboat (1876), now in the Walker Art Gallery, Liverpool, Cat’s-paws off the Land, which was bought out of the funds of the Chautrey Bequest in 1885, and is now at Tate, The Clearness after Rain (1887), which won for the painter the grand prix and legion of honour at the Paris Exhibition of 1889, A Breezy Day in the Channel (1888), Shine and Shower (1889), Summer at Sea (1893), and Britannia’s Realm (1880).