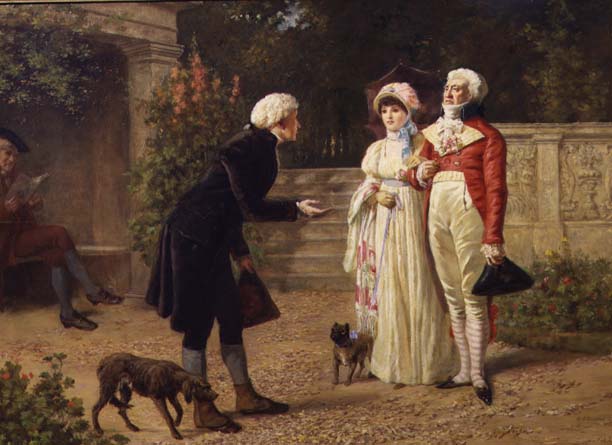 This painting, set in an earlier age, is typical of Glindoni’s work and interests. Before becoming a full-time artist Glindoni worked in the theatre as a scenery painter, and augmented his finances by sketching the artists with whom he came in contact. Once a professional artist he specialised in elaborate and detailed costume genre scenes set in the seventeenth and eighteenth century, and all these influences and interests are evident in the costumes and poses in this work.

Like many Victorians, Glindoni was also interested in the work of William Hogarth, the eighteenth century painter and satirist, whose strong narratives and moral tales appealed to the Victorians love of visual story-telling and rigid morality. This painting adopts Hogarth’s caricatures. The dogs reflect the character of their owners: the beggar’s dog looks a bit sly and has its tail between its legs, while the pug apes the pompous face of its owner.

Henry Gillard Glindoni was born in London in 1852, one of five orphans raised by their grandparents. He attended the Castle Street School of Art in London, and at some point, he Italianised his name from Glindon to Glindoni.