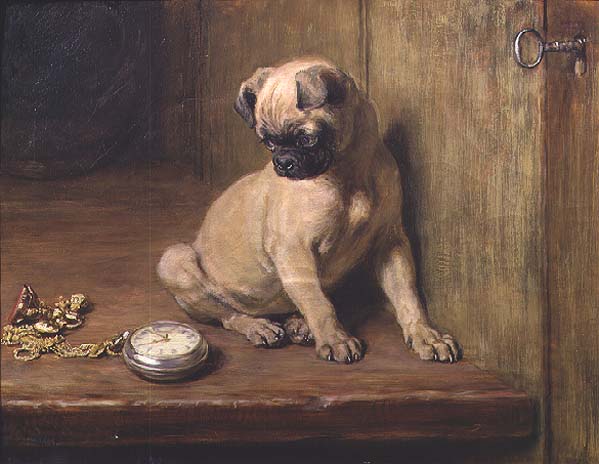 Animals were a popular subject with Briton Riviere, often, as in this example, sentimental, rather humanised pictures of dogs. He is quoted as saying in an interview “I have always been a great lover of dogs … However you can never paint a dog unless you are fond of it”. And here is a very fond picture of a pug puppy fascinated by and staring intently at a ticking pocket watch with an elaborate gold chain. The comic perplexity of the puppy is cleverly rendered.

Merton considered Riviere to be “the most distinguished English artist in the portrayal of animals” and the successor to Edwin Landseer. He owned several of Riviere’s work but thought this one “perhaps the one he appreciated most as his own work, although on a small scale”. Despite this, we know that he sold this painting at Christies in 1905, so must have bought it back again at some point.

Briton Riviere was born in 1840. He studied at Cheltenham College where his father, William Riviere, was a drawing master. He was precociously talented and sent two of his works for exhibition at the British Institute at the age of eleven, Kitten and Tomtit, and Love at First Sight. As early as these works were, they gave a good indication to the direction that his painting was to take. He debuted at the Royal Academy in 1858. In the early 1860’s he came under the influence of the Pre-Raphaelites, particularly through Millais and produced several paintings according to the principles of the brotherhood. However, these works found no favour with the exhibition committee of the Royal Academy and were turned away. He began exhibiting again at the Royal Academy in 1864 when the influence of the Pre-Raphaelites was less discernible in his painting and was elected as an ARA in 1878 and a full Academician in 1881. As an animal painter, he was the heir to Landseer. In many of his ambitious works, the depictions of animals were used in dealing with the grander subjects such as Persepolis, In Manus Tuas, Domine and Daniel. His most typical works are animals showing discernible emotions and human characteristics such as Treasure Trove, Sympathy and An Anxious Moment.