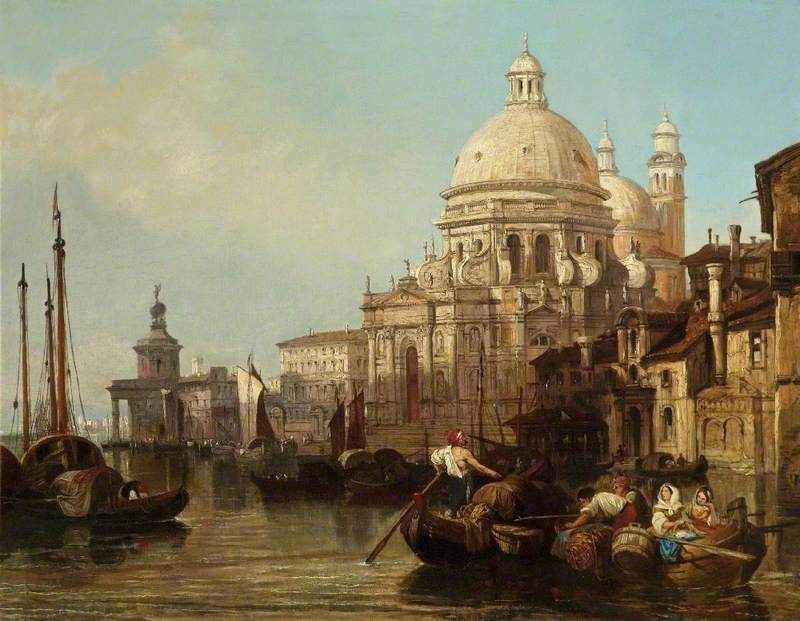 This view of Venice looks down the Grand Canal with Santa Maria Della Salute (Basilica of St Mary of Health) on the right-hand side. Fashionable and wealthy British families sent their sons on Grand Tours of the art, history and culture of Italy. The growth of these Tours, from the 1700s, meant that visitors wanted reminders of their Italian and European adventures.

Selous became a wealthy London painter, illustrator and lithographer. His father George Slous was already a well-known Flemish painter of portraits and miniatures so Selous came into contact with art at an early age. He received a liberal education in music, literature and painting and his ability in art was precocious. He entered the Royal Academy Schools aged 14 years where he won several medals. His early works were exhibited under the name ‘Slous’, but later he adopted the name ‘Selous’ to avoid confusion with his father.

He painted views of Venice, Switzerland, England and the Rhine, historical scenes, contemporary events and illustrations for Shakespearean tragedies. Examples of these are The Opening of The Great Exhibition and 1864-8 he undertook the work on which his reputation now rests, the illustrations for Cassell’s Illustrated Shakespeare. In this own time, Selous was routinely described as a genius of singular talent. His works were exhibited internationally.