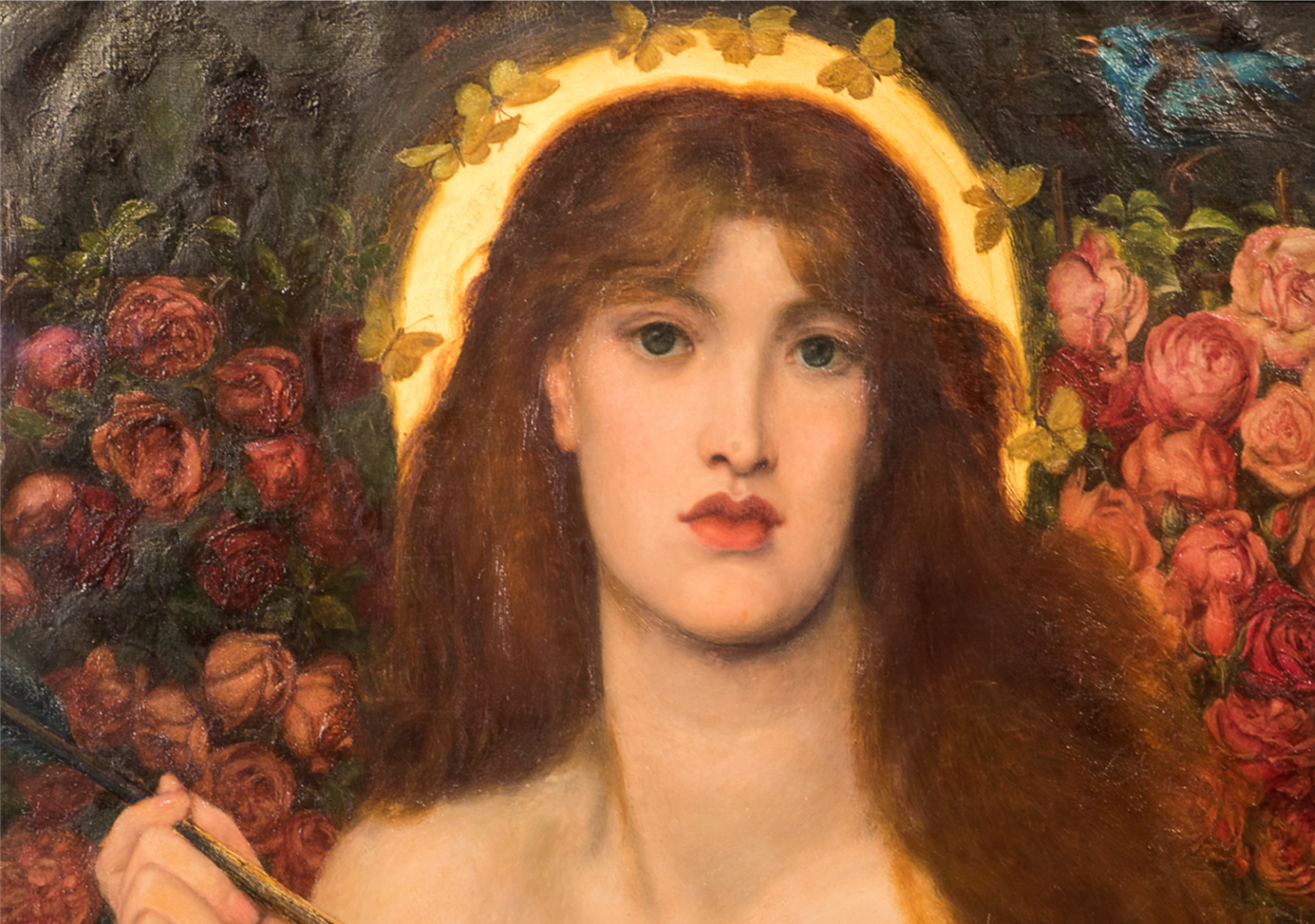 The title of the painting refers to a quotation from the Roman poet Ovid, who describes one of Venus’ attributes as being able to assist Roman women to turn their hearts towards virtue and modesty. This does seem somewhat contradictory for such a heavily sensual and sexual image, but perhaps it is a warning of the dangers of sexual obsession.
The painting is heavy in symbolism. Venus is surrounded by flowers, the roses represent love, while the honeysuckle symbolises sexual desire and lust. The golden fruit may be seen as the fruit that tempted Eve and led to Adam’s downfall in the Garden of Eden. Alternatively, it may be interpreted as the Apple of Discord from the Greek myth of the Judgement of Paris. In both stories, the presence of a tempting fruit in the company of a beautiful women leads to the downfall and death of men.
Venus points Cupid’s arrow at her own breast to show how she will inflict its power over others. A blue bird in the top right corner foretells doom. The moths or butterflies drawn to the light of Venus’ halo, only to perish, illustrate the brevity of life. There is a golden aura around her head, her hair is long and flaming red. A hair colouring favoured by Rossetti, the other Pre-Raphaelites and their followers. Red hair was chosen because of its rarity, and associations with excessive emotions for example sexual desire.
Several of these symbolic and mythological elements appear in the sonnet that Rossetti wrote when he had finished the painting.
She hath the apple in her hand for thee,
Yet almost in her heart would hold it back;
She muses, with her eyes upon the track
Of that which in thy spirit they can see.
Haply, ‘Behold, he is at peace,’ saith she;
‘Alas! the apple for his lips,—the dart
That follows its brief sweetness to his heart,—
The wandering of his feet perpetually!’
A little space her glance is still and coy;
But if she give the fruit that works her spell,
Those eyes shall flame as for her Phrygian boy.
Then shall her bird’s strained throat the woe foretell,
And her far seas moan as a single shell,
And through her dark grove strike the light of Troy.
There is an air of ambiguity, attraction, and inner conflict in this painting. It is also significant that this is Rossetti’s only nude painting in oil. The original model for the work was an unnamed cook who worked at Portland Place, London. The painting did not sell, so Rossetti repainted Venus with the face of Alexa Wilding, one of his favourite models. 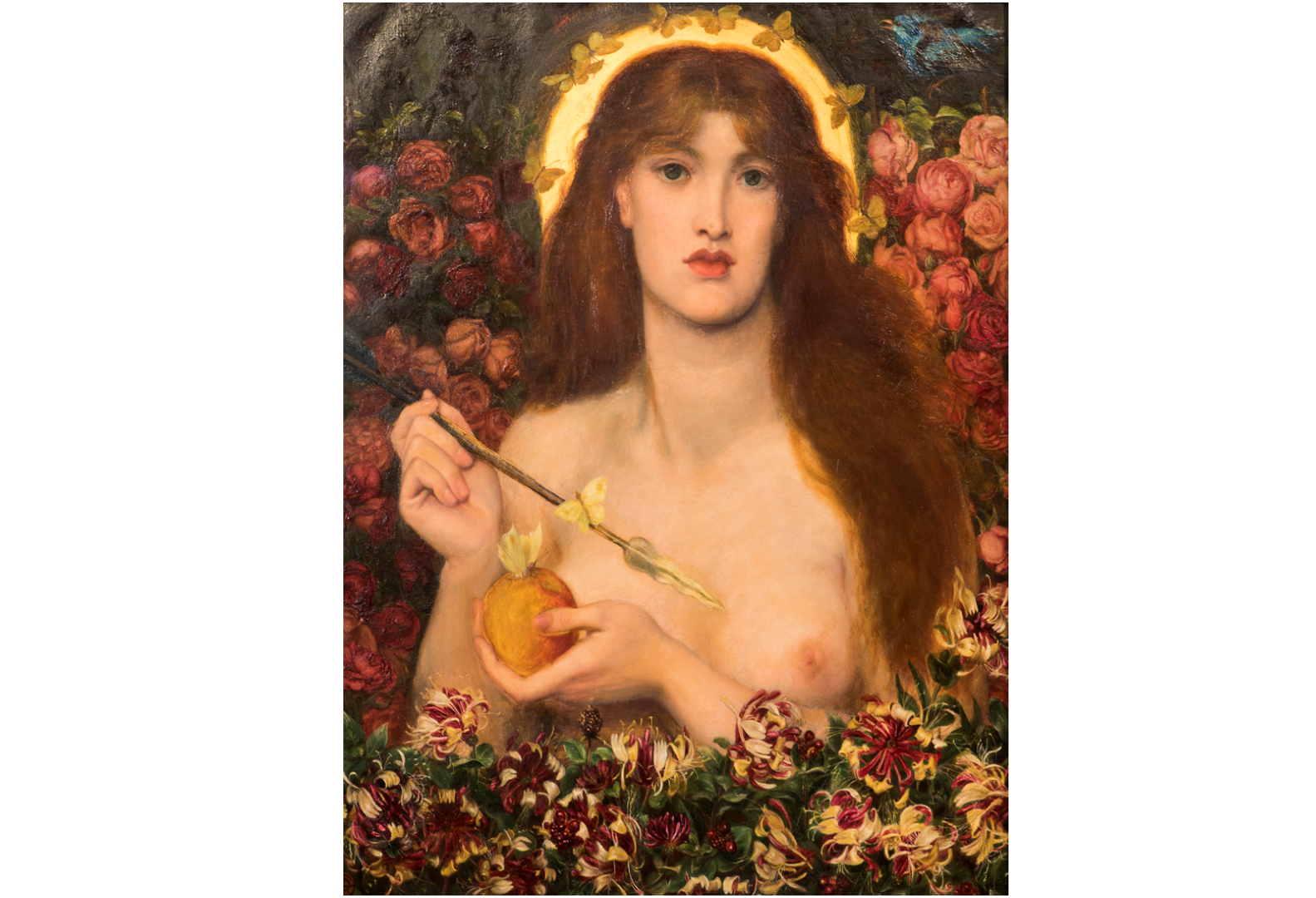 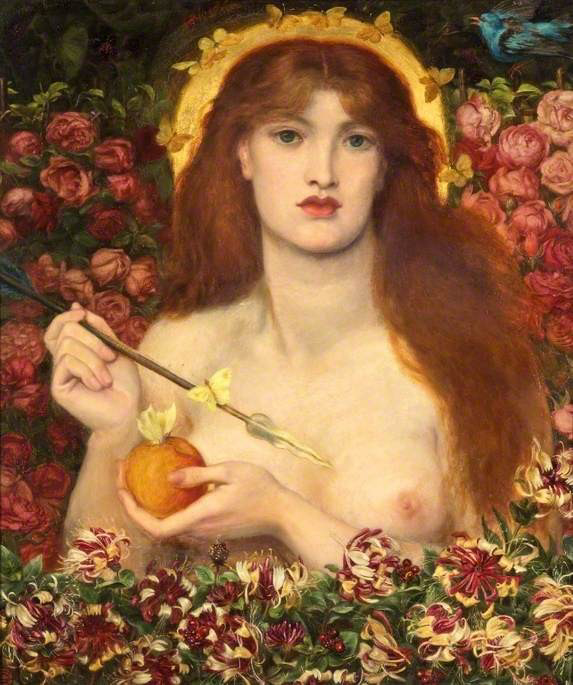