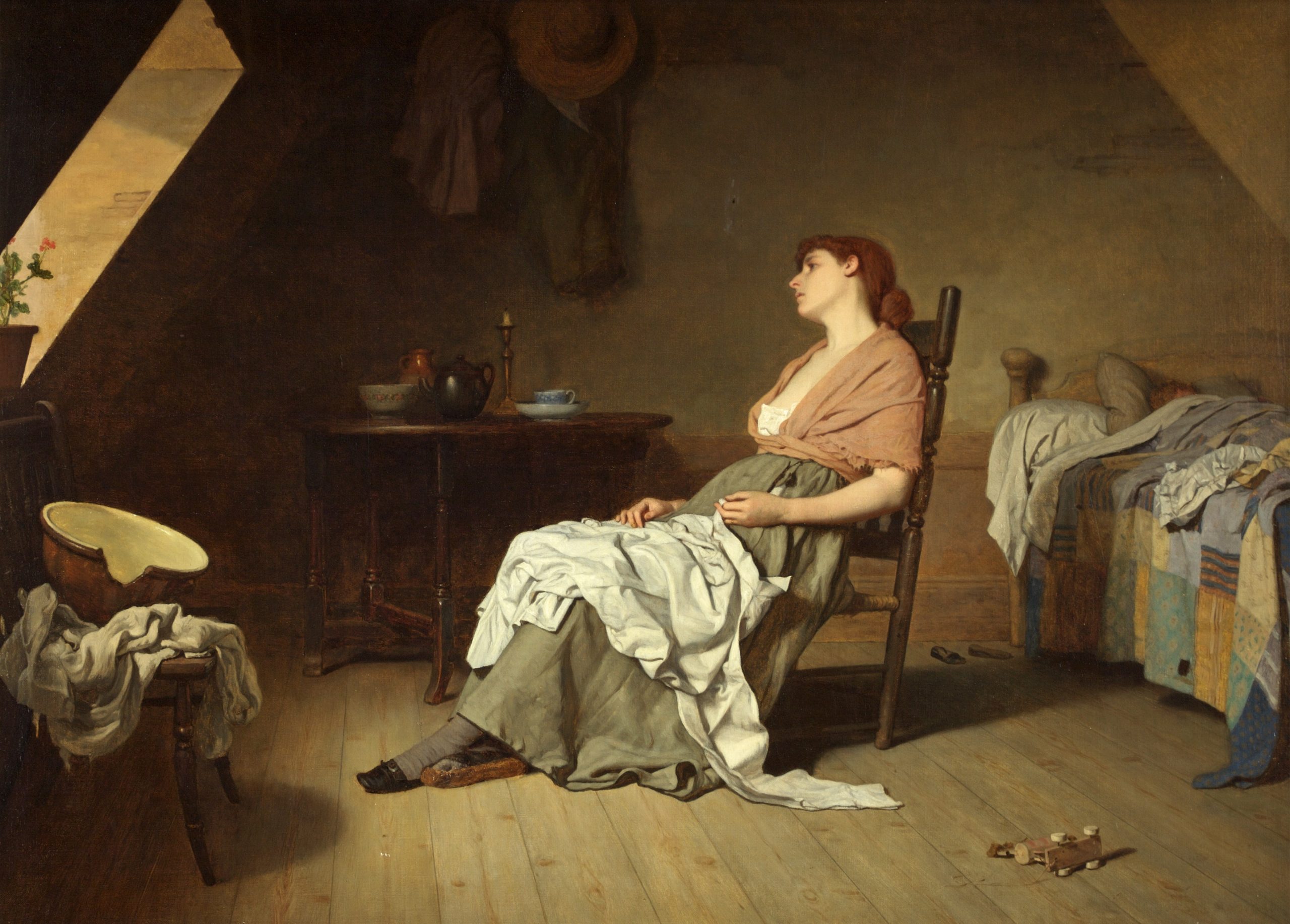 There is some confusion over the title of this painting by the genre and watercolour painter Edward Radford. In 1877 the Art Journal, who owned the painting, claimed that it was exhibited at the Royal Academy in 1873, yet the only painting exhibited by Radford that year was called Reverie, and so it is likely that this is the correct title for the painting more commonly known as Weary since 1877.

The artist often specialised in highly detailed interiors containing a central female figure and this painting is no exception. Set in a sparsely furnished garret or attic room it shows a seated woman wearing a red shawl. The Victorian viewer would understand that she has been working through the night stitching a shirt that lies in her lap, as the light of dawn breaks through the attic window on the left. On the right is a bed in the corner of the room covered with a patchwork counterpane. The tousled head on the pillow reveals a small child sleeping. This small presence is also indicated by the discarded toy on the wooden floor in the foreground on the right and a pair of tiny slippers neatly lined up on the floor at the head of the bed. So the painting indicates that the woman’s wearisome task is in dedication to her child.

The image focuses on the solitary female pieceworker working long hours into the night. Her attitude is one of total exhaustion; her fingers are probably sore from so much stitching as she pauses from her work to look upwards towards the window, as if for divine inspiration. Below the window, in partial light, is a chair on which a broken bowl rests. The artist uses a number of other visual clues to emphasise her plight such as her straw hat hanging on the peg reminiscent of more innocent, perhaps rural times, slippers, discarded toy, snuffed out candle and her exhausted expression. The objects in the room are symbols of her destitution, in particular the plant in the window, often a feature of Victorian narrative paintings and accurately read by a Victorian audience. The single parent status of the young woman intentionally invited speculation amongst contemporary viewers with several possible readings attached to her position and the poverty to which she had been reduced, possibly by having an illegitimate child. This singular reflection creates an emphasis for the viewing public as they too can connect with the solitary activity and servitude of the young woman.

The painting taps into a well known nineteenth century tradition. The sempstress was an icon of the Victorian era and a subject for moralizing, serving to prod the national conscience. The poem The Song of the Shirt by Thomas Hope made an enormous impact when it first appeared in Punch magazine in 1843. It highlighted the exploitation of the sweated labour of sempstresses and drew attention to the notorious social abuse of the sweated labour of the clothing trade. This poem tripled the circulation of Punch and through its imagery the public was made aware of the working conditions and unhealthy lives of the piece workers as well as the factory workers. The poem brought to public attention the sordid facts about the disgraceful working conditions, long hours, poor pay, unhealthy lives and frequent deaths of the clothing workers working in crowded sweatshops rather than alone in an attic. At the same time one of Punch‘s editors, Henry Mayhew, was documenting different social types in London and highlighting the plight of the poor and dispossessed and wrote:

During the course of my investigation into the condition of those who are dependent upon the needle for their support, I had been so repeatedly assured that the young girls were mostly compelled to resort to prostitution to eke out their subsistence, that I was anxious to test the truth of the statement. I had seen much want, but I had no idea of the intensity of the privations suffered by the needlewomen of London until I came to inquire into this part of the subject.

Henry Mayhew, 1849: The Unknown Mayhew: Selections from the Morning Chronicle, 1971

Inspired by Hope’s poem, artists responded to the theme. A number of paintings showing an impoverished sempstress, and incorporating elements found in Hope’s poem, began to appear. Richard Redgrave exhibited The Sempstress in 1844, which included a candlestick containing a nearly expired candle, wash basin, some sewing items, teapot & cup symbolic of better days and atrophying plant on the windowsill. Unlike earlier treatments of this subject, which more recognisably portray the sempstress as a figure of suffering and pity, Radford’s painting is more ambivalent and largely redemptive. Despite the hole in her shoe, the woman does not appear totally destitute, the plant on the window sill is healthy, and some of the other items in the room do not totally indicate suffering and decay. The painting speculates more on why she is in these reduced circumstances rather than on the specific details of her plight, for instance no sewing accoutrements are included. The light shining through offers hope and redemption.

Two other paintings on the same theme were painted at about the same time, The Seamstress 1875, by Frederick Daniel Hardy 1875 and Song of the Shirt Frank Holl both treating the subject in the same way as Redgrave’s earlier work. By contrast the woman in Radford’s painting does not appear to be a low born drudge but rather a distressed woman from a higher social order, now abused, neglected and displaced by the consequences of the industrial revolution. Yet still the viewer must ask why is she on her own in a garret, has she been widowed and is down on her luck, or is the child, and consequently her current situation, the result of her loose morals? When the Art Journal produced an engraving and accompanying text of it in 1877, they introduced several features which closed down any alternative meaning: the woman has far coarser features, more noticeable cracks appeared on the walls; the candlestick is less elegant, the tea cup of a lower status, the plant is wilting, and a black bottle has been introduced which leads to a very specific meaning that drink has been the cause of her loose morals which led to an illegitimate child.

To fuel the debate about the correct title for the painting, the museum has a letter from the artist written the year before he died, in which he states that the Art Journal of 1877 description, title and interpretation of his painting is incorrect. He felt that the accompanying drawing in the Art Journal coarsened and changed the subtler message of the painting, by adding prints on the walls, and a bottle on the table. The artist stated that his intention in the painting had been to focus on pray and work, what he described as Labora et ora, though the more usual phrase is ora et labora. Essentially he was stating that life may be a struggle, but that redemption will be reached through prayer and work, placing God at the centre of all one does.

The widely populist social realist school concentrating on the sufferings of working people rather unsurprisingly did not appeal to Merton Russell-Cotes. He probably bought the work because of the pretty woman in the centre of the image, affirming one of his perceptions of womanhood and importantly, in view of her status, performing a didactic function for public view. He bought the painting from the Dowdeswell Gallery which was also exhibited at the famous Manchester Jubilee Exhibition of 1887. In his autobiography he observed that a smaller version of his was made by the artist for the Duke of Albany.