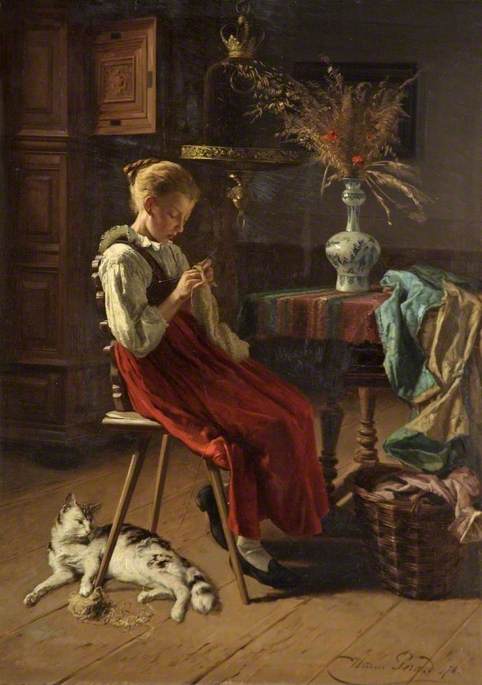 Gérard placed his scenes in contemporary settings and his inspiration was drawn from the charms of everyday life. Girl Knitting is a good example of the artist’s mature style in the romantic tradition of Dutch 19th century domestic interiors. The scene represents the untroubled contentment of youth but details such as the empty gilded birdcage, often a symbol of passion, hint at the troubles of adulthood. Gérard treats the subject with a spontaneity that reveals the quiet intimacy of the scene. Lit by natural light from behind, the girl is concentrating on her knitting. Gérard depicts the exquisite cream and turquoise cloth draped over the table. Beside this is a magnificent narrow necked blue and white vase filled with corn and poppies indicating it is summer.

Gérard, a Belgian painter and engraver, was a pupil at the Academy in his native town, Ghent, where he worked until aged 29 when he moved to Brussels. In Brussels he painted domestic scenes which quickly gained him recognition in Belgium and later in Germany, America and England. He was awarded medals for his work in Brussels, Vienna, Philadelphia and London. Gerard was made a professor at the Belgian national school of art, the Brussels Academy of Fine Arts.